When Therapists are Lunatics: A Review of 22 Faces by Judy Byington 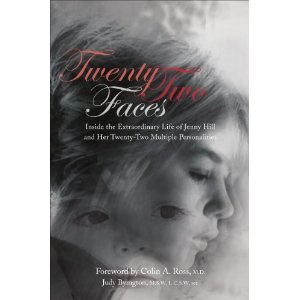 Twenty-Two Faces by Judy Byington falls within an outdated genre of prurient Satanic Panic supernatural-erotica-sold-as-a-true-story pulp novels which enjoyed a certain popularity throughout the 80s and 90s. It tells the story of one Jenny Hill, a former prostitute and drug abuser who, upon submitting herself to psychiatric attention, learned that she had Multiple Personality Disorder (MPD) (now known as Dissociative Identity Disorder [DID]). Surely, this diagnosis must have come as quite a relief, as it promised that Hill herself need not bear any of the responsibility for her own actions, which the book describes as, at times, being outright psychopathic. The book makes quite clear that every foul thing Hill ever did -- from slashing her sister with a razor blade out of mere curiosity of the consequences, to allowing herself to be pimped by a husband she met whilst working with sex offenders (he was one) -- was actually the mischievous doings of personalities that resided within her, and without her own conscious awareness. Unfortunately, this ultimate absolution came at a predictable cost: in accepting the MPD/DID diagnosis, Hill would also have to necessarily accept that she was harboring “repressed memories” of traumas which she would need to recall in the course of reintegrating her fractured mind. Fortunately for Hill, however, nobody required of her that the heartbreaking story of traumatic abuse that she would “recall” need make any sense, and the fact that it doesn’t seems to have completely escaped her biographer, Judy Byington.


Invoking the specter of sinister, underground secret societies dedicated anti-human Evil (as well a the comparatively petty-minded abuse of Ms. Hill) Twenty-Two Faces pays homage to debunked Satanic Panic literature of years past, even placing the book Satan's Underground by Lauren Stratford in the bibliography, despite the fact that this book was so thoroughly discredited as to be withdrawn from publication, with the author changing her name and running off, abandoning her claim to Satanic cult abuse to instead pose as a childhood victim of the Holocaust.
Of course, even the old MPD/DID narrative is dubious enough, to put it nicely. The most recent research from out of Harvard finds that, despite claims to otherwise, those diagnosed and demonstrating MPD/DID do not actually suffer amnesia between one personality state to the next. Nor has the notion of traumatic repression -- the likes of which is described in “case studies” like the Jenny Hill story -- stood up to scientific scrutiny in the course of the past 20+ years since MPD/DID enjoyed its Sybil-fueled faddish rise.
But, to argue against the credibility of Twenty-Two Faces by invoking current progress in brain research, or even arguing against the existence of wide-scale secretive Satanic cult mind-control plots, is to give the book far too much credit. Twenty-Two Faces doesn’t merely beggar the imagination in its over-the-top conspiracist description of MPD/DID (though this it does, with Jenny’s “alters” [alternate personalities] recognizing themselves as merely sublimated entities that reside in hidden “rooms” in Jenny’s mind, ever watching to take over when things get too hairy). Twenty-Two Faces defies scientific credibility altogether by being a supernatural tale. To wit, the book includes:
Twenty-Two Faces follows the life of Jenny Hill as presumably reconstructed from her memories, “recovered memories”, and diaries in which Hill and her varied “personalities” wrote and signed entries. Remarkably, despite these diaries, Jenny Hill -- apparently never curious as to who else was writing in her private pages -- is supposed to have been unaware of her “alter” personalities until having entered therapy as a psychiatric in-patient.
We are made to understand that Hill begins to experience “lost time” at the age of 4, when her abuse is said to have begun. The lost time is accounted for as episodes during which other personalities took over her consciousness so that Hill might not be troubled with the terrors of the abuse she began suffering at that age. One would think that such episodes, starting at such an early age, would establish an expectation of occasionally lost time, or an acceptance on the part of the protagonist that she had never quite grasped what time is. Not so with Ms. Hill. Not only did she fully grasp the cultural context and broad implications of the depravities that are said to have befallen her at age 4, she is also uncannily aware of the dates and times that eluded her at an age when most children are unable to properly read a clock.
The antagonist of Twenty-Two Faces, Hill’s oppressor, is the quintessential villain of conspiracy folklore, managing membership in several scheming cabals which may appear paradoxical or mutually exclusive to the untrained paranoid. Not only is he a God-less Jew, but “turncoat” Nazi Jew who worships Satan. His name is Dr. Greenbaum, and his legend precedes this rambling and dissonant tome within the fringes of hysterical recovered memory-derived folklores, best explicated by a Dr. Corydon Hammond in a speech he gave in 1992 titled Hypnosis in Multiple Personality Disorder: Ritual Abuse.

Hammond, telling of this dastardly Jewish Nazi Satanist, whose existence was reported by entranced subjects of recovered memory therapies, speculated upon Greenbaum’s designs for world domination: “My best guess is that the purpose of it [the satanists] is that they want an army of Manchurian candidates — tens of thousands of mental robots who will do prostitution, do child pornography, smuggle drugs, engage in international arms smuggling, do snuff films, all sorts of lucrative things and do their bidding. And eventually, the megalomaniacs at the top believe, [they will] create a satanic order that will rule the world.”
This is heady stuff. However, the Dr. Greenbaum of Twenty-Two Faces fails to live up to one’s expectations of a such a world-dominating force. For all his power, the evil Doktor still remains very careful to return Jenny home on time for supper after her Satan-appeasing torture sessions, lest her parents become suspicious that something is amiss. This, unfortunately, renders a certain climactic twist-in-the-plot senseless, as we learn that Hill’s parents were in on the whole thing all along.
Herr Doktor is aided by two bumbling teenage ne’er-do-well buffoons, both of whom he regularly whacks with his gnarled cane while they openly discuss -- like Scooby Doo-grade villains -- the evil plots they are enacting. Hill remembers every word of it, even full statements spoken backward, as Satanists apparently like to do. You see, Hill’s memory for these past events is near photographic. Thus, when Hill meets a wheelchair-bound friend in a home for the disabled who describes her condition -- which finds her skull grotesquely inflated with water -- as encephalitis, I can only wonder why the poor girl wouldn’t know that her condition would actually be called "hydrocephalus".
Naturally, Hill also learns, by means of "recovered memories" that she was raped by her father. She invites her parents to her psychiatric hospital, where she is an in-patient, so that she may accuse him. Apparently heartbroken and outraged, her father storms out. More narrative incoherence occurs some pages later when it is reported that Hill was saddened to not be invited over for the following Family Christmas.
All of this idiocy might be amusing if it was all written with competent pacing and prose. As it is, the reading is entirely tedious, and it seems that every other page we have to go through the whole `where-am-I-what-have-I-done?' routine.
The book has a forward written by one Dr. Colin Ross, of whom I will say nothing, but please see my previous piece about this dubious expert here: http://www.process.org/discept/2010/02/08/dr-colin-a-ross-psychiatry-the-supernatural-and-malpractice-most-foul/
The book also contains an endorsement from one Joyanna Silberg, Ph.D., Past President of the International Society for the Study of Trauma and Dissociation (ISSTD) which, if anything, says something negative about the ISSTD more than it tells us anything substantive about Byington’s book. Silberg claims that she and her peers “are all too familiar with the kinds of crimes and disorders described in 22 Faces.” Indeed, this year the ISSTD is hosting a conference which will feature a lecture on the topic of Ritual Abuse given by one Ellen Lacter, whose website offers helpful (if hardly coherent) tips such as “Pray a perimeter of protection against everything of witchcraft”, and discredited British therapist Valerie Sinason.
And here we have a real problem: therapists hiding their most unhinged paranoid fantasies under a veneer of scientific credibility derived from case studies and surveys applied to those whom they’ve previously infected with their conspiracist ideas. Never mind that Past Life Regression and Alien Abduction narratives, too, are derived from “recovered memories”; to question the bizarre claims put forward by Byington or the perpetually panicked ISSTD faithful is to invite criticisms that you, in fact, have an “agenda”. To doubt the truth of recovered memory narratives is to support child abuse.
This tactic of argumentation is truly offensive, as it hijacks children’s rights and attempts to create human shields of real victims as protection against criticisms directed at patently absurd claims. In the proper context, Twenty-Two Faces is a helpful book, as it illustrates this problem clearly for those who may doubt the magnitude to which conspiracists have over-run the study of Dissociative Disorders. Byington does not simply misappropriate the condition of multiple personalities as a plot device for her ridiculous book, she shows the condition for what it largely (if not entirely) is: a collaborative therapeutically-created delusion. In trying to expose a Satanic conspiracy, Byington unwittingly exposes a foul movement that exploits vulnerable mental health consumers. Let’s hope the licensing boards and professional associations eventually move to erase such embarrassments from practice.