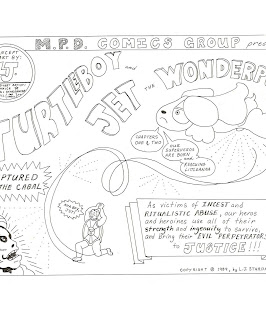 The other week I received an email from a friend of mine in Wisconsin who had been mortified by the Wisconsin Coalition Against Sexual Abuse’s (WCASA, “Wisconsin's only state-wide coalition dedicated to ending sexual violence”) apparent unwillingness to abandon certain artifacts of the long-debunked Satanic Panic of the eighties and nineties.  Until recently, their website listed Satanic holidays that all concerned citizens should be extra wary during, as well as information regarding the mythic diagnosis of Multiple Personality Disorder (from which the recovered “memories” of this disorder’s victims remarkably serves as the only “evidence” – still! – of these homicidal, community-depopulating Satanic cults).  My friend had been asking WCASA to justify their  purveyance of this conspiracy for some time, and we were both pleased to find that such references had suddenly been cleaned from the site.
Upon following-up, though, my friend in WI wrote to me:

I asked WCASA for a look at their resource center material and am saddened to tell you that they have not eliminated some of the most obnoxious stuff imaginable from their library, such as a copy of " Michelle Remembers". They've apparently only scrubbed their website.

On the bright side, one of the titles they have available is " Turtleboy and Jet the Wonderpup: a therapeutic comic for survivors of ritual abuse".

You couldn't make this stuff up.


Michelle Remembers is, of course, familiar to me.  Marketed as a true story, the protagonist, Michelle, suffers abuse by none other than Satan himself, and is later healed of her scars (thus also conveniently removing physical evidence of abuse) by the Good Lord Jesus personally.

Turtleboy and Jet the Wonderpup, though… that was a new title for me, so I ordered a used copy immediately.  Today, I wrote this email back to my friend in WI:

I got my copy of Turtleboy and Jet Wonderpup.  I actually got it the other day, opened it right away, looked at it briefly, threw it down on the coffee table and tried to laugh about it.
It's like scrotal elephantiasis: disgusting and sad, yet amusing.

LJ Stardancer is one sick twist.  It occurred to me that it is simply not possible for one such as her to ever go back on their SRA [Satanic Ritual Abuse] claims after producing such a work.  To do so would admit to this depravity as a product of her own mind.  and this is no minor depravity.  we have disemboweled children, a frame in which a child is humping his doll... in my favorite part (if I had to chose one), Jet the Wonderpup flies overhead a satanic orgy, pissing on the heads of the antagonists declaring, "My pee will set her free."  Jet's magic piss leaves the villains frozen till (Christian) law enforcement arrives.

Of course, being a children's comic, one doesn't want to leave things implied in subtleties, so we see an explicitly rendered image of a woman in a dog-collar fellating a man amidst an pile of either dead or sexually engaged adults and children. It is these people, of course, that Jet is pissing on.

LJ Stardancer, it turns out, is affiliated with an organization called “Survivorship”, upon which the self-declared former Masonic assassin (and all around amazing action hero) Neil Brick sits on the Board of Directors…  Oh, the meetings these people must have! 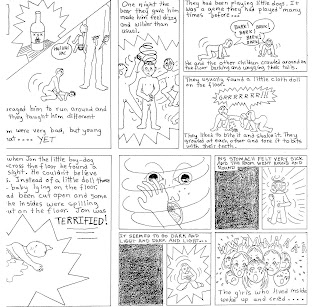 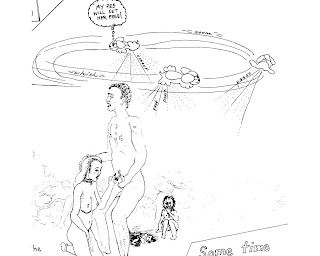